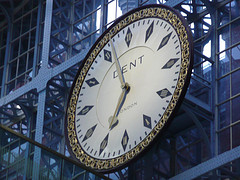 The Audio Obscura booth sits in the centre of St Pancras Station. Audience members can borrow a headphone set (leaving a credit card or phone as deposit) any time between 12 noon and 8pm. The ‘performance’ lasts for 30 minutes and audience members are invited to wander around the station and listen.

The piece has two main ‘layers’: text, written by Lavinia Greenlaw, and performed by 12 actors (who represent a mix of ages, accents and genders), and a soundscape designed by Tim Barker and Harry Escott. The headphones block out surrounding noise, so only the loudest of announcements invade the piece, and there are times that feel almost magical when the audience watches the bustle of the station with no accompanying noise – an experience which heightens our attention to the visual, and our response when sound resumes.

Greenlaw is explicitly exploring the ephemerality, proximity and fragmentary nature of our experiences in train stations. The accompanying leaflet states that Audio Obscura “is situated in tension with our compulsion to construct narratives”, and it is this aspect of the work that is both intriguing, and potentially frustrating. The audience is placed in the role of detective, and active participant. The characters give us snippets of thoughts and facts, half-glimpsed insights into stories, which insist on us filling in the blanks, or perhaps simply reveal our desire to find meaning and create narrative from what we come across.

A woman discovers a traumatic secret about her husband of thirty years. We know it is connected to a computer, we are given the image ‘like meat on skewers’, we have her reaction ‘you fucking bastard,’ and hear her fear that he, and perhaps she will go to prison. From this we are left to find our own response.

Other stories are even more fragmentary: a woman refers to a procedure that ‘can be messy’ and questions if she should have shared the information with ‘him’; a man says ‘I shouldn’t have told her about my brother’ – but we are given no other clues. The piece is all about what is not said, and how we find meaning (or don’t find meaning) in the spaces in between. Some may find that frustrating, but that frustration, that raising of questions and then refusing to fully answer them, is in fact the core of the piece and speaks to its site-specificity: a train station filled with people arriving, and departing, a place that offers us only momentary glimpses of people’s lives.

Perhaps a better way to assess the effect of Audio Obscura is to think instead about atmosphere and theme, rather than narrative arc or drive (Greenlaw does create a male character, who punctuates the piece with rising urgency, looking for his train platform, which he eventually finds, and then boards his train. Despite giving the piece some narrative drive, I actually found this the least satisfying strand, perhaps because it was the least mysterious). Through carefully chosen language (the piece throughout has a strong poetic quality and rhythm), and a soundscape that both supports the tension and melancholy of the words, and creates another rhythm – of silence, not quite heard conversations, train announcements, traffic noise – Audio Obscura creates an overwhelming mood, encompassing secrets, leaving, fear, regret, and what cannot be said. On a personal level I was left with more questions than answers, and a strong sense of disquiet.

Greenlaw switches between third, second and first person narrative voices, utilising the different effects of each – the ‘objectiveness’ and intrigue of ‘he is not saying what he wants to say’; the uncomfortableness of being addressed as ‘you’; and the voyeuristic feeling of having immediate, fleeting access into a stranger’s head in the first person sections.  I was less convinced by the lists of nouns, although they did lead to the final moment of the piece: ‘step, step, step, step’, which effectively drew me back into the space I was inhabiting and watching. 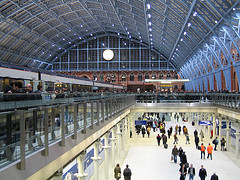 Audio Obscura is a piece that exists at the intersection between the text/sound, the audience and the space. St Pancras station was a fitting selection of location, with its stunning architecture, a layout which allows the audience to wander without feeling hassled, and to stop and take in a view, and its own atmosphere of peace and reflection. I couldn’t help thinking that the piece would have been significantly more problematic if located in King’s Cross Station during the building work for instance. The piece gives significance to the everyday, creating a performance (or perhaps just revealing it) from the daily bustle of a station. The isolation of the headphones, the almost complete blocking out of external sounds, and the shifting narrative voices result in a shifting relationship between the audience, their environment and the people around them, and lead us to question our own visibility/invisibility in the space.

A high quality, free experience that enhances the audience’s experience of a fantastic piece of London architecture and immerses them in an absorbing atmosphere, Audio Obscura challenges and perhaps exposes our desire for narrative and meaning. For me it didn’t go too far, or disintegrate into mere fragments without any meaning or connection, which is a risk with a piece like this. It did frustrate me, but I see this as a deliberately created effect which only enhances the piece.

This entry was posted in News. Bookmark the permalink.