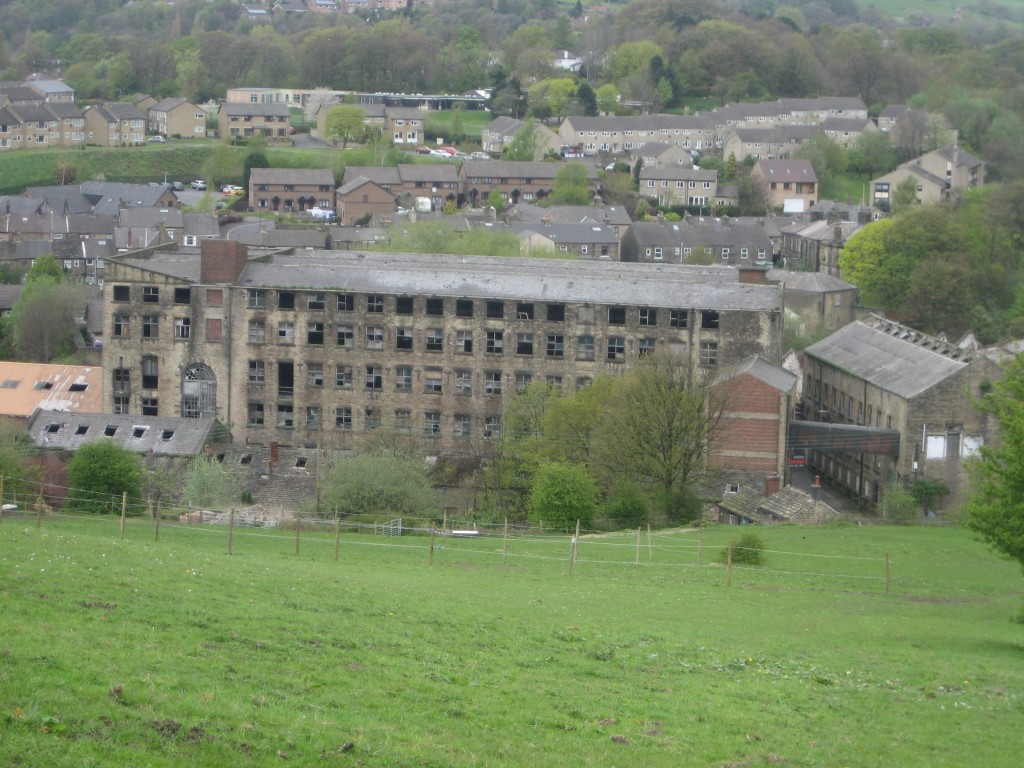 Walking between the buildings was like entering a cave: the wind and the day’s noises dampened by stone and brick. Nothing but the hack of crows from the rooftops, the soft cooing of pigeons, the slap of wings as one took off, and the click click of Karen’s heels on the tarmac.

I was one of eight writers commission by the Centre For New Writing at Leicester University to create new work inspired by the post-industrial lives of buildings in Glossop and Leicester. I explored the history and current uses of the Howard Town Mills in Glossop. My five flash fictions are available to read online.

As a writer endlessly fascinated by the relationships between people, place and story, I like nothing more than turning my attention to a place I don’t yet know and trying to elicit its narratives, connections and tonalities in order to find a way to write about it.
In as far as I have a method it loosely involves four activities: walking, talking, reading, writing. I began this commission by walking (in the pouring rain) around Glossop, with a map of mill sites. Walking down Milltown, I came to where the road narrows between two towering, dilapidated mills – a covered, rusted metal bridge branded Volcrepe, stretching high above – and immediately fell in love with the place. I followed the line of the river and discovered more mills (which I later discovered were variously known as Howard Town Mills and Woods’ Mill), some falling down, one used as storage space, another redeveloped into a slightly bland shopping centre and hotel. 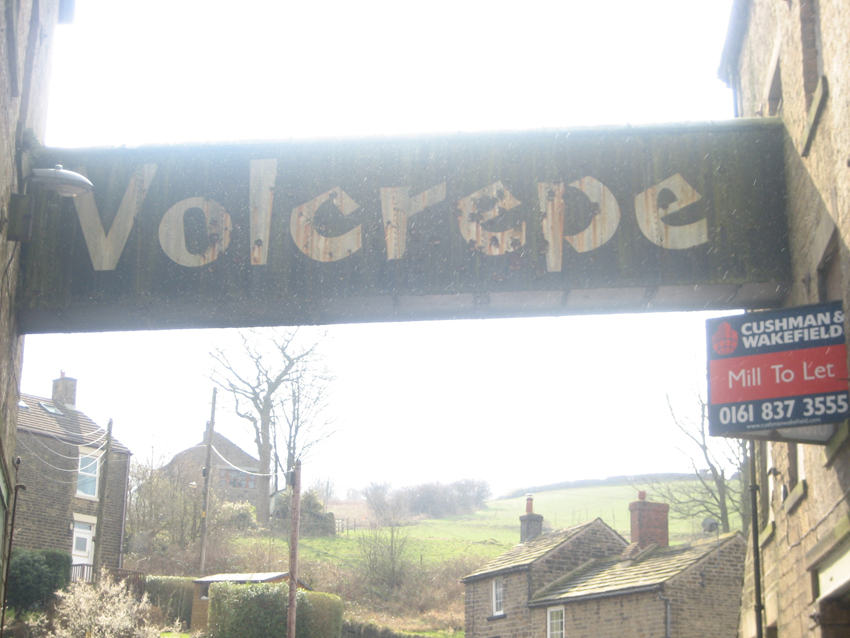 My next step was trying to find out more about the site – easier said than done: Glossop’s mills have changed hands and uses frequently I discovered, and my online research left me frustrated and confused. Enter Glossop Heritage Trust and the font of wisdom that is Mike Harding. I spent a fascinating day in the Heritage Trust’s cramped office, going through newspaper cuttings, old photos, and documentation from the mills. I now had some names and a bit of context and was becoming more and more interested in the occupation and use of these buildings after the decline of the cotton industry. I knew that Volcrepe used to make cellular rubber products and that the women’s clothing and underwear companies Lux Lux and Ritz were based in what is now the shopping centre.
The Glossop Chronicle kindly agreed to publish a call out for anyone who worked at Volcrepe, Lux Lux or Ritz, and I was contacted by Mike Bowler, who worked in Volcrepe’s Sales Department from September 1974 to August 2006 when Volcrepe’s Glossop mill closed. We met, and Mike told me about the history of Volcrepe, its eventual buy-out and closure, and about the process of making cellular rubber – not too dissimilar to making a cake apparently!
In amongst this research I continued to visit and walk around Glossop: drinking earl grey tea in a new cafe next to the refurbished Howard Town Mill; peering through security fences and into broken windows of the derelict buildings; hanging out down by the rubbish-clogged river. 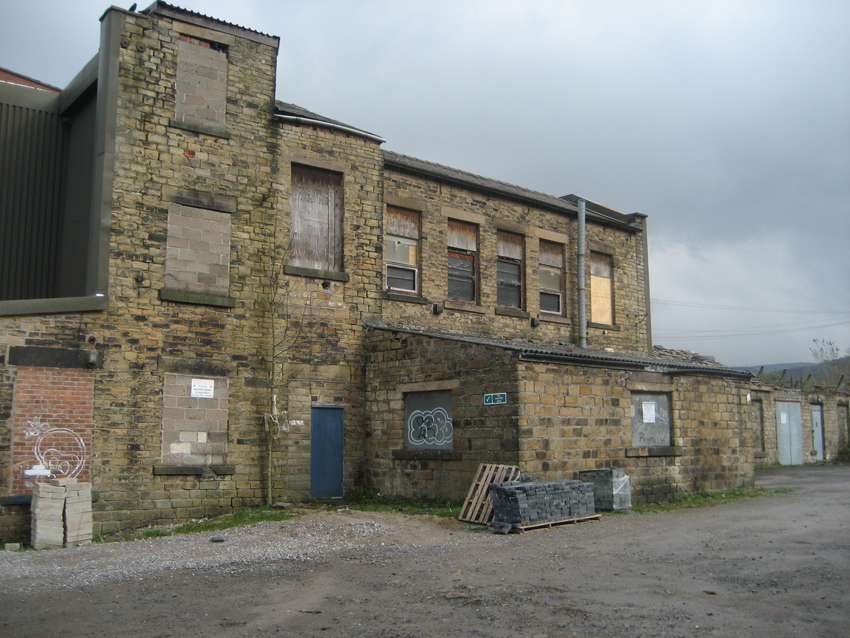 So, I’d walked, talked and read; now I had to work out how to weave these stories, observations, conversations, experiences and thoughts into five short fictions. Flash fiction, as a form, insists that you hone in on an image or idea with great clarity; there is little room for rambling or digression. I spent a lot of time playing with ideas, looking for images and moments I wanted to capture. The theme that kept coming up, again and again, was the place of the past in the present – how it is lost, re-imagined, replaced, remembered or forgotten; it is this thread that connects these five stories.
Unlabelled Photograph 1, the first piece of the collection, is inspired by a photo in the cafe where I had drunk tea, made notes and sheltered from the rain. The cafe is in a new building which has been decorated with an extraordinary number of old light fittings, stuffed animal heads, paintings, old photos. The woman in the photo made me think of the women’s garments manufactured on the site; about the sea that the river outside eventually meets; and about the fact that the photo had no context at all, not dissimilar to some of the photos Mike Harding had shown me, donated to the Heritage Trust with no labels, no names, no dates.
A New Mattress is a flight of fancy responding to a mattress warehouse I peeped into down by the river, and the company’s van which was always parked outside. I wanted to explore the idea of how we might try to regain what is lost in a sensory, physical way as well as through our mental images and memories.
Made In Glossop and Lemon Drizzle respond directly to my conversation with Mike Bowler from Volcrepe: the first riffs on the fact that Volcrepe used to make gaskets for the toilet doors on board Concorde; the second plays with his image of cake-making and the history of Volcrepe’s closure and that of the takeover company.
The title of the final piece, Zombie Sweetheart, comes from a piece of graffiti on one of the derelict mills either side of Millstown, where I walked that first day in Glossop. The story tries to capture the beauty and the bleakness of this space, and make connections between endings, dereliction and new beginnings. 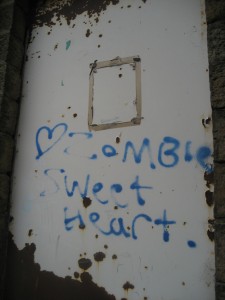