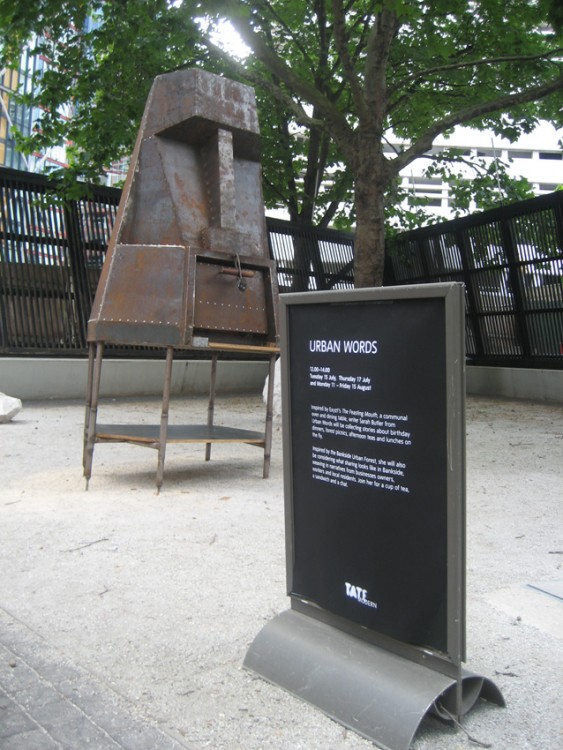 The scaffolding escaped – out the back, through the gaps between the burnt wood, onto this white beach with its strewn rocks and forgotten trees. It was done with the building site – concrete blocks, fluorescent clothes, each kick tipped with steel; dreamt instead of long lunches, meandering conversation, a table on a beach by a street in a city.

In the summer of 2014 I was writer in residence for the Tate Modern, based in their ‘pocket park’, a piece of land ‘stolen back’ from the building site of the Tate Modern extension. The space itself is an artwork called The Skirt Of The Black Mouth, by Ivan and Heather Morison and in summer 2014 it was occupied by another art work, The Feasting Mouth, a communal oven and dining table designed by Exyzt. 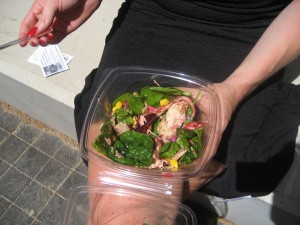 I collected stories about birthday dinners, forest picnics, afternoon teas and lunches on the fly. Inspired by the Bankside Urban Forest I considered what sharing looks like in Bankside, weaving in narratives from businesses owners, workers and local residents. I shared lunches with project managers and construction workers involved in the new extension, as well as local residents, bee-keepers and artists. 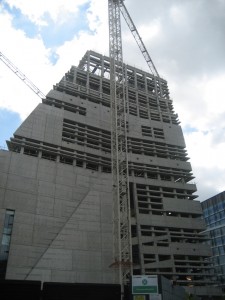 The project blog hosts new short writing inspired by my conversations. Three longer form essays have been published in a limited edition book by Tate Modern, and are available to read online:

The Skirt Of The Black Mouth