Last night I was one of 12 Manchester writers reading new work inspired by lost Manchester buildings as part of Manchester Histories Festival. 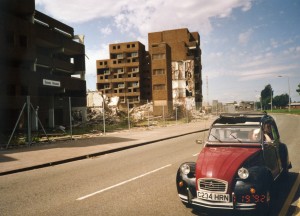 I wrote a piece called FORT, inspired by this photograph, recently unearthed by my dad. Taken in July 1992 it shows me with a very bad perm in our old 2CV in front of Fort Ardwick – a notorious, systems-built housing development in east Manchester. I find it funny that I look so bored in the photo, considering my current interest in urban spaces!

Everyone said it was shit. And it was – sure it was. People hated it so much they stopped calling it Coverdale Crescent and started calling it Fort Ardwick. The thing is though, a fort is basically a castle, just better. Plus it was where I lived.

Nobody liked it, but then nobody liked me and I was okay – just people looked at me and thought I wasn’t. I saw them – still do – holding their bags against their stomachs, bringing their elbows in – I’ve never hurt anyone, me.

They said it was shoddy, thrown up, not enough care taken. The concrete panels weren’t made properly – the holes didn’t quite line up. You know what it’s like – you’re putting a flatpack cupboard together and something’s not in the right place but you just bodge it instead of sending it back, starting again, because you want the cupboard up and you’ve got other shit to do.

They had to get these consultants in, after they’d finished, to rebolt all the panels or something , so the whole thing didn’t fall down. Cost a bloody fortune my nan said, and that’s our taxes. And even then the rain got in. They’d put straw between the concrete, which sounds a bit medieval to me, and no-one wants wet straw walls, right? Cockroaches and rats and mould and that.

My nan remembers when they knocked down the terraces. I remember when they knocked down the fort. And maybe they had a point about it being shoddy, because soon as the diggers got their claws in, the whole thing fell to pieces, like it was made out of cardboard and bits of selotape, not concrete and glass. A fort one week, a pile of rubble the next. No-one wept for it, they say.

I didn’t cry, but I stood at the end of the street and watched the diggers pawing at the walls, ripping the place to bits, our old kitchen wall gone and the cooker and the cupboards and the crap plastic clock just there for everyone to see. Except there was no-one else looking.

I went down the library and looked up the word fort. It had all the usual stuff – fortified, defensive building. Blah. And then it said that the phrase ‘hold the fort’ meant: to act as a temporary substitute, cope with an emergency. And I thought yeah, that’s about right.